Home » BEER » Best Airlock for Beer Making(Review 2022) – What are the 2 different types Between Three-Piece and S-Shaped of airlocks?

While not the most exciting piece of equipment, the airlock is an essential part of your beer making kit and is fitted to the top of your fermenter during the fermentation process. It allows carbon dioxide, that is released during fermentation, to come out of the fermenter and it can do this without letting any air in which would cause oxidation and damage your beer.

In this article, we take a look at the important role of the airlock in the brewing process and what to expect from your airlock. We also explain the different types of airlocks available as well as going through our pick of the best airlocks currently on the market.

Do I need an airlock for brewing beer?

The answer to this question is 100% yes! In order to achieve successful fermentation of your beer, an airlock is an essential piece of kit. Also known as a fermentation lock, an airlock essentially allows your beer to release the gases it produces during fermentation while not allowing any air to enter the fermentation chamber thus preventing any unwanted bacteria getting in. An airlock is necessary for brewing beer as it helps to relieve internal pressure inside and also prevents bacteria  from entering your wort and therefore plays a key role in ensuring your beer does not get ruined.

How does an airlock work?

So, now you know the purpose of the airlock it would be useful to know how it actually works. In order to understand how the airlock works, it is helpful to think about it as a one-way valve in that it releases gases but does not allow anything else to enter. It can do this because of the balance of pressure. As the fermenter is sealed there will always be more pressure on the inside than on the outside, in that, as the sugars ferment, they release a gas which is less dense than the sugar and therefore causes the internal pressure to increase. This forces a bubble in the airlock as the gases are released, therefore releasing the pressure in the fermenter. When the airlock stops bubbling this means that the pressure has equalized.

What are the different types of airlocks?

A three-piece airlock is the preference of many homebrewers, especially those that are just starting out. As the name suggests this airlock can be separated into three pieces so that it can be cleaned easily which is a welcome relief if it gets clogged up during the fermentation process. Thanks ot being easier to clean, three-piece airlocks also tend to last that much longer saving you on constantly shelling out on a new one when the old one gets clogged up!

You can use a three-piece airlock for both primary and secondary fermentation. It needs to be filled with water to create a barrier between you and the fermenting beer. Some brewers who know their stuff prefer a three-piece airlock as they can hold a lot of water and need refilling less frequently, as your beer ferments it can ‘spit’ out the water so this is a favorable feature of an airlock. Especially when it comes to secondary fermentation the water retention in the airlock means that you can leave your beer to ferment for a while without having to check up on it.

An s-shaped airlock comes in just one piece and is formed out of two straight tubes connected to a drain trap (and is vaguely reminiscent of an s shape!). Some brewers prefer s-shaped airlocks because they allow you to see the fermentation process in action and, as they come in one piece, it is not as easy to lose vital pieces of equipment!

Should my airlock be bubbling?

For many first time brewers anticipating the appearance of bubbles in the airlock is a stressful time as this is an indicator that fermentation is working inside the carboy. This will normally occur around a day or two after you start the fermentation process. If you don’t see bubbles at this point, there may be a few reasons why that you should know how to look out for.

It might be that your fermenter is not fully sealed, so check the lid is on properly and also check that there aren’t any cracks in the fermenter you are using. The lack of bubbles in the airlock after a couple of days may also be attributed to the temperature of the wort. If the wort is cold then it takes longer for the airlock to bubble as it absorbs more carbon dioxide so less gas is initially vented.

Other indications that fermentation is working

While seeing bubbles in the airlock is a reassuring indicator that fermentation is working it is not the only way to tell this. If your beer is in a transparent container you can look to see if there is any foam around the fermenter – this is a key indicator that fermentation has occurred. You can also peek through the airlock to check for this if you are using a plastic container to ferment your beer in.

As you can see, an airlock is an essential item if you plan on brewing your own beer. There are plenty of airlocks out there to suit all budgets. In this next section, we take a look at some of our favorites. 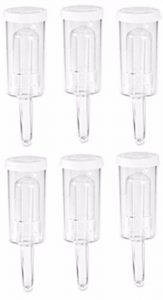 This pack of airlocks from Home Brewing Supplies offers great value for money as for under $10 you will receive 6 airlocks. These are three-piece airlocks that are made out of quality BPA free plastic and are the perfect choice if you’re looking for an airlock for your fermenter. These easy to use airlocks can simply be placed in the top of your fermenter of choice, then all you need to do is await those bubbles.

The way this airlock works is through the pressure exerted by the fermenting beer which causes the airlock to move up and down and, through this process, permits the unwanted gasses to be released from the fermentation chamber. The three-piece construction of these airlocks makes them easy to deconstruct and clean after use. With this pack of airlocks, you will be keeping your fermenter sealed for a long time to come. 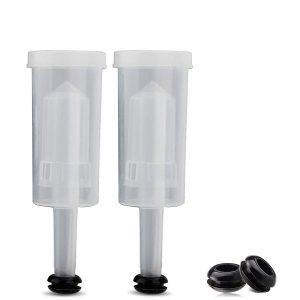 For some trustworthy airlocks that you can rely on look no further than this pack of two three-piece airlocks made by Jansamn. Coming with a one year guarantee you can be assured of their quality as they will replace the product if you have any problems with it within that time. Made out of BPA free plastic these airlocks come in three pieces which makes them incredibly easy to clean even if they get very clogged up during the fermentation process.

Thanks to the silicone grommet, once placed inside the top of your fermenter these airlocks will ensure that a full seal is created to enable fermentation to work effectively. The design enables carbon dioxide to be released whilst not allowing any bacteria to enter the fermenter keeping your beer safe from infection. Order yours today and get started with this key part of the brewing process. 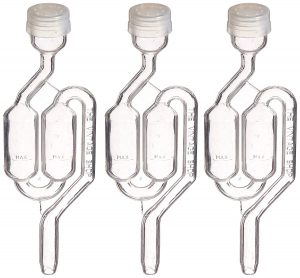 If you’ve been searching for an s-shaped airlock to use for secondary fermentation then check out this great value pack of 3 airlocks from Vintage Shop. Having three in a pack really extends the possibility for fermentation – you can use these for brewing beer but also for making wine and even fermenting vegetables! Let your hobbies run wild with this great value set of airlocks.

For the price, these airlocks have great durability and are designed to ensure that fermentation is as smooth as possible and that your beer ends up tasting delicious. These airlocks will fit in easily into most fermenters and will ensure that the only substance passing through is the carbon dioxide escaping. Your fermenting beer will be protected from any unwanted bacteria entering the fermenter thanks to these quality airlocks. 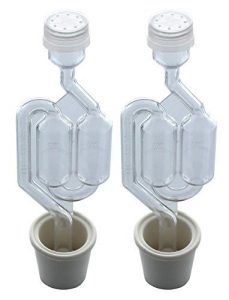 The simple yet effective design of this airlock is sure to impress you as you progress in your beer making journey. The bung at the end of the airlock ensures that it can be placed securely in the carboy (or whatever fermenter you are using) making sure that the beer is completely secure and able to successfully ferment.

Coming in a pack of two, these plastic twin bubble airlocks are great value for money and for $5.00 you can look forward to watching your beer as it successfully ferments (check out those bubbles!). Keep oxygen out and allow carbon dioxide to be released with these quality airlocks and give your beer the best start in life. For a bargain price, you can ensure that your beer is able to ferment in the way it is supposed to thanks to these airlocks. 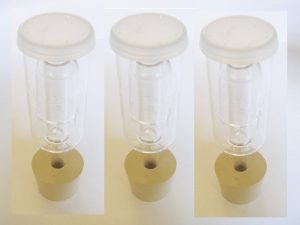 If you are someone who wants to brew multiple small batches regularly, then it’s worth getting the value in a multi-pack of quality airlocks. This three-pack of air-locks is suitable for use on 6-gallon carboys that have an opening of up to 1.6” and 1 or 2 gallon growlers. The special design ensures your fermentation process allows sanitary out-gassing as well as making them nice and easy to clean themselves.

Other things to like about these airlocks are that: they are a great price and cheaper than some individual airlocks; they ensure unwanted oxygen stays out of your beer as the C02 gets passed out; you can enjoy seeing the fermentation in action as you notice your airlock bubbling away, and; they are also suitable for use in wine and mead production. The downside of these airlocks is that they aren’t suitable for wider necked carboys or fermenters.

It can be tempting to overlook something as unexciting as an airlock when you start out brewing your own beer. However, the airlock is actually a vital piece of equipment in anyone’s brewery if they want to ensure their beer doesn’t get exposed to unwanted contaminants when releasing the massive amounts of carbon dioxide produced by the fermenting process. Nobody wants there hard work to turn into gone off beer!

So now you know about the importance of the airlock in the brewing process and the different types of airlocks out there on the market for different brewing needs all you need to do is get out there and choose your bit of kit. On this list, you’ll find some of the best air-locks we’ve had the pleasure to work with that will make sure you always produce the freshest taking homebrew in town.